Tattoos are something that used to be frowned upon and yet now seem to be something we see on almost everyone.

They vary from small pictures or words to full sleeves, or even whole body works of art.

I have a few.. each with their own story. I think over time that’s what they become. However, I always thought one particular type of tattoo carries with it a curse and I believe, for me anyway, that it is and was true.

My first one was in a way an act of rebellion. I was 18 and had been in Australia 5 years. Being the teenager I was and having been told I was never allowed to get one, what did I did as soon as I was able….. well get a tattoo of course!

At that stage of my life I dreamed of being a marine biologist. You know one of those fit young women who swims with the dolphins and plays with all the marine animals. Like we see at Sea World and on TV.

So away I went, I got a dolphin with a blue Maori pattern. As usual at the time, on the right pelvic bone, which would be seen when I wore my bikinis to the beach.

Back when wearing bikinis was what I did.

It hurt like hell and I managed to keep it hidden from my parents for a while. My mother was the first to spot it and from there well the rest was history.

When I was pregnant my dad used to laugh and comment on how the head of my dolphin was becoming the size of a whale. Note to all the women out there, think about if you’re going to have kids when you decide on where to get a tattoo as they don’t quite return to normal after being stretched beyond what feels like a few watermelons!

Needless to say my tattoo returned to somewhat normal and my parents forgave me.

Time for a bigger one I said.

A few years later and a painful 8 hours I had a side piece. A somewhat green, red and yellow cherry blossom. Something I pictured as white and pink but did not turn out that way.

A piece that I have fond memories of.

The next smaller one was of a persons name. Now I say this like that as I had always vowed NEVER to get a persons name tattooed onto me. I always thought it would ‘curse’ me and or the relationship in some way.

People used to laugh at me when I told them this but I stood my ground.

Well until January 2018. I had been married almost two years and with him for nearly six. We had talked about getting each other’s name on ourselves…….. ah, sweet, how romantic you might be thinking or even cringing and thinking how corny. Well it was always discussed and I managed to put it off for over a year.

However, January 2018 rolled around and we had bought the house, been married for almost two years as I said before so I though that it couldn’t possibly be cursed. Everything was going swimmingly. Or so I thought.

On it went, 1 hour and a small simple pattern on my left wrist.

By May 2018 we were separated, by July the house we bought only a year earlier was sold and I haven’t heard from him in months.

Cursed you say? Was it the tattoo? Who knows but I do stand by the notion that by putting his name on me I had in some way cursed myself. It was just a feeling.

It’s now January 2019 and I have started the process of having it lasered off. 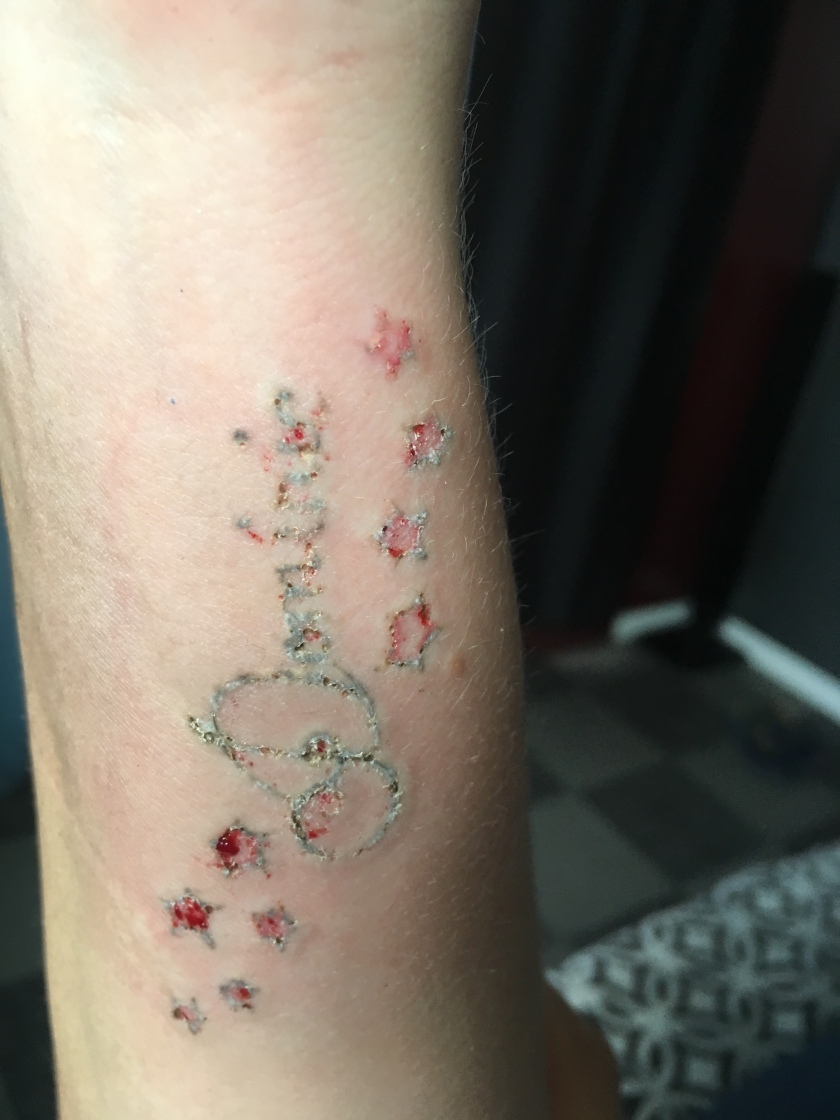 This was day 2. It took about 15 minutes and hurt like hell. It’s literally like having your skin burnt off, slowly, and you cannot pull away!

Itchy as hell and still a reminder but soon enough will be gone. 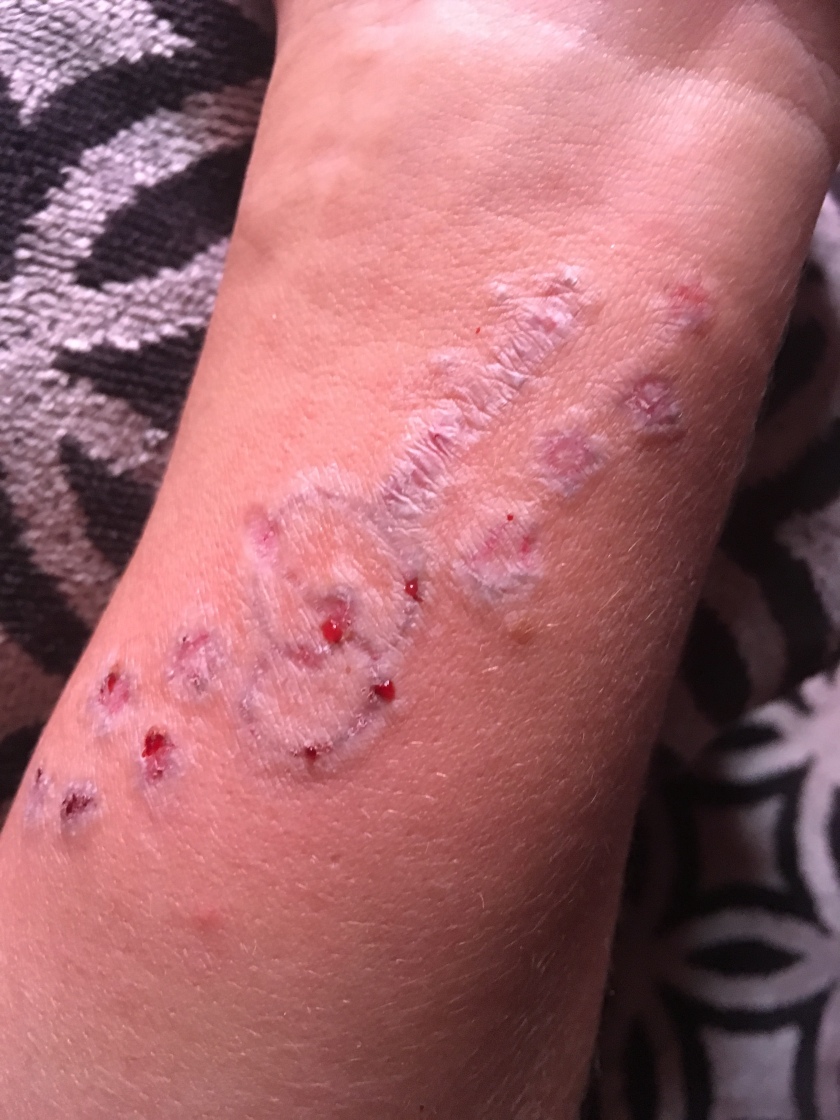 Round two and this time I thought it would hurt less. I was very wrong! This session hurt even more. She spent a lot longer on it and as she said later; “I really zapped it!” You sure did I thought. 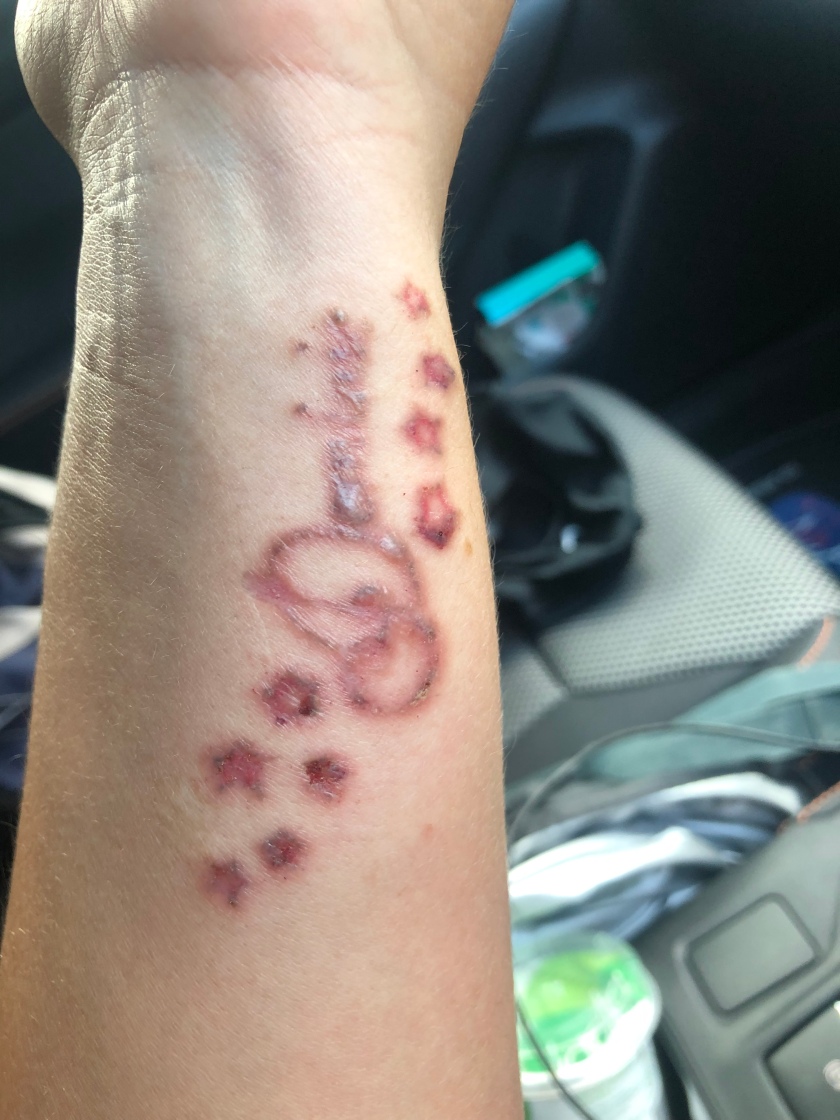 Two days later and it was swelling up like a water ballon on a tap. It hurt, was itchy and burnt when I touched it. One more session to go I hope!

I suppose after all this, and when it’s finally gone I am not sure it won’t be ‘completely gone’. There may still be marks and a tiny bit of scarring but at the end of the day it will be a constant reminder for me.

Right now I do not even know how to describe me. I am a weak but I am strong, I have hit rock bottom and recovered. Some days I soar, others I hide. Writing comes at the most different of time! View all posts by insightintowhatitsrealkylike

One thought on “The curse of the tattoo.”