It is surreal to think about where I was not only two weeks ago. Being back in the normal day to day activities of a school teacher, I find myself day dreaming and looking out the window expecting to see the snow capped mountains I became so accustomed to.

I wake with a start hoping, yes hoping, to find myself on the thin mattress, my clothes and hiking pack strewn all over the tent floor beside me.

But, no, I am in Australia, at home, in a bed and my clothes, while still possibly strewn on the floor are not half as dirty as the ones I was dreaming of!

The second half of this amazing journey was completing the Salkantay Trek. This trek is one of the many pathways the Incas took to get to Macchu Picchu. However, the Salkantay is less traveled by tourists and the general public.

Well it is because it is dam, hard! Its a mental, physical and emotional challenge!

It is 5 days of waking early, constant walking, sometimes for 8 hours or more, over mountains, through snow, rain, sleet, amazonian heat and humidity and bugs…. lots and lots of very large bugs!

We talk about Melbourne weather here in Queensland being temperamental but man this was unreal!

Let me take you through the days one by one!

Day 1, the start…… a puffed out 15min walk from the bus and I was thinking to myself, I am already puffed, how am I going to survive the next 5 days…. A bead of sweat on my forehead and the heart rate increasing……..

It was okay though, these were all an effect from nerves and of course the altitude, as we were now sitting at 3800m above sea level. After breakfast in one of those amazing igloo shaped buildings, which mind you are quite warm and are part of the accommodation available for those who wished to rest prior to the trek, we set off…… 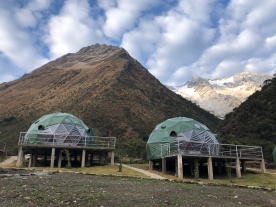 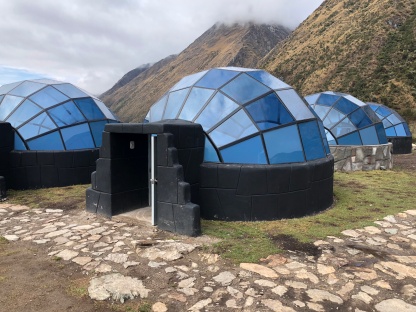 The main section of day 1, and by far the most challenging section, was passing through the Salkantay pass, bordered by Mt. Salkantay herself. She is one astonishingly beautiful mountain who frequently disappeared behind the clouds only to reappear a minute later!

This is her, a majestic snow capped mountain!

It took us approximately 5 hours to get to the top of the pass. We had already climbed a number of false peaks, at the top of which we thought, no more! But of course we kept going. Slow and steady, the altitude making it slow and steady!

It was cold, the lungs were burning, the hear rate was up and the legs were protesting, not wanting to take another step!

Finally, as we topped the 4800m crest we started getting wet with rain. The students commenting on how they hoped it would snow! We had mentioned snow was unlikely and we would have to be extremely lucky!

Well within a few minutes this rain turned to sleet and the sleet to snow! For one of our students this was her first time seeing snow, let alone having it thrown at her. It was such an amazing experience.

Lunch in freezing temperatures, huddled in a make shift thatch covered sleeping area, we admired the mountains as they disappeared under a white blanket, completely in awe of where we were and what we were seeing. I was wearing everything I possibly could and was still cold.

After lunch we left the snow capped mountain and began the decent through the pass and into the valley below where we spent our first night, a very cold night. 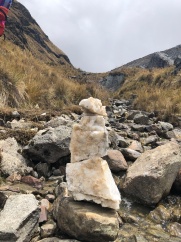 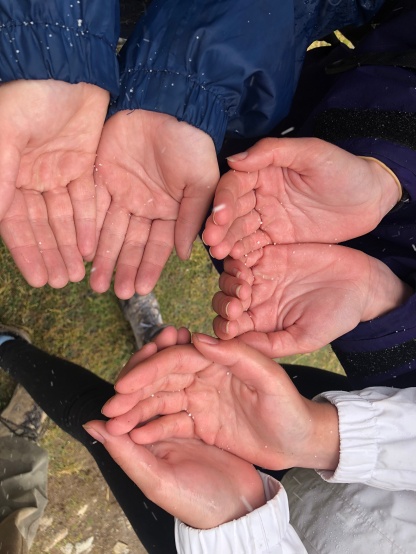 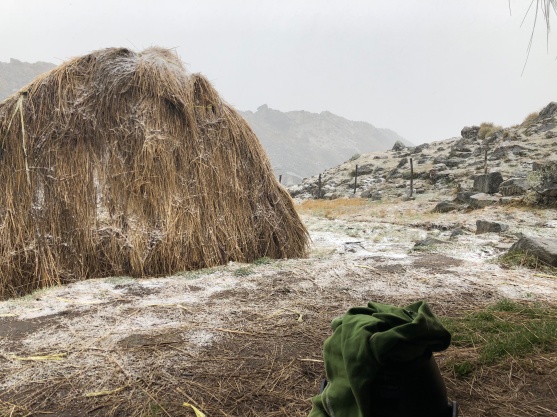 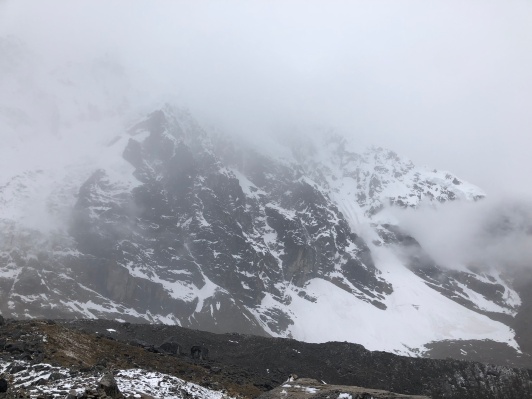 Day 2 was totally different, we entered the Amazonian forests. The heat, the humidity and of course the giant bugs that come with a rain-forest environment surrounded us. The mosquitoes were the size of small birds, okay a small exaggeration, but the holes they left in us were and still are quite large and very very itchy! We could not believe the change in climate!

Day 2 was 27km of downhill! This may sound easy, but let me assure you it was not! Camp was hot and humid however, a beautiful place to finally make at the end of a long 8.5 hours of walking. Again, something that had become the norm, we were accompanied at the campsite by a number of dogs. The dogs are everywhere. They line the city streets and all the public campsites even on the trek!

Apparently there is no control over their breeding and in some ways are appreciated by the locals as they deter the native wildlife when in camp. Most were clean enough, others were walking rabies infestations. Note to travelers – maybe consider a rabies vaccination! 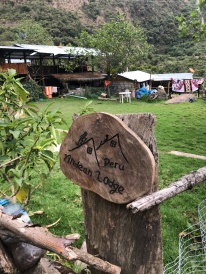 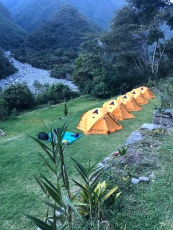 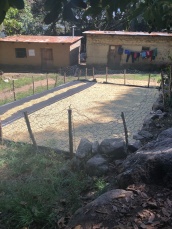 Day 3 was a massive day. Whilst only 14km long,  it took us just over 8 hours to crest the mountain our camp was resting on top of. From this camp we could see Machu Picchu, so far away, yet so close. There is no better feeling than seeing your end goal, the reason you are doing the trek, the final days reward as you fall asleep exhausted from the days trek.

We still had a way to go yet but it was a sensational feeling.

Playing UNO while we sat inside a small building atop the mountain, thunder, lightening and torrential rain outside. The mist covering the mountains, we as, as a group came together enjoying each others company and relishing in our individual accomplishments.

The conversations often ‘interesting’ and the topics discussed deep and meaningful. This is what I treasure the most, watching the team push through the hard times, smash those mental, emotional and physical barriers and come together on the other side! There is no better reward. 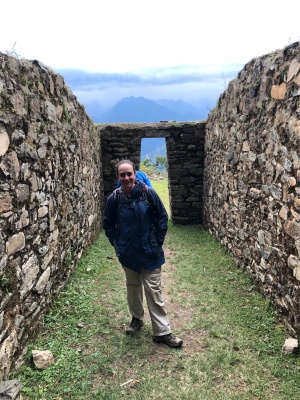 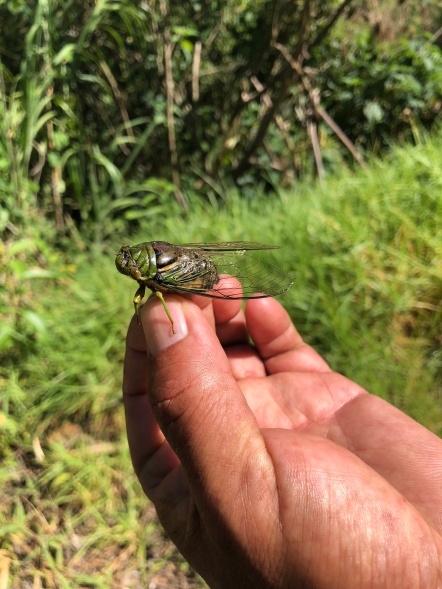 Day 4, we descended the mountain and followed the train tracks which never seemed to end arriving at our base camp after a mere 17km and 8 hours of walking. Again!

Machu Picchu looming ‘very’ high above us, almost unreachable at that point in time. We all took a moment, stopped and said to one another; “How do we get up there tomorrow?”

Accompanied by 9 wild dogs. Each of which were given a descriptive and amusing name. We enjoyed our final camp dinner, cooked by our very own chef. The chef, who had managed to erect a make shift kitchen using a tarp and three wooden pylons. A hot drink and the maize specialty dessert were had before we retired early, knowing we had a 4:30am start. 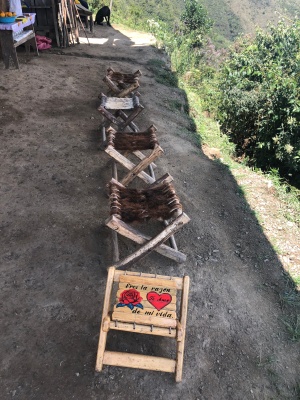 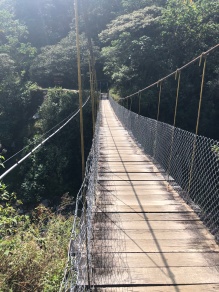 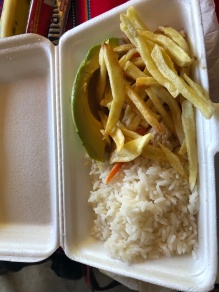 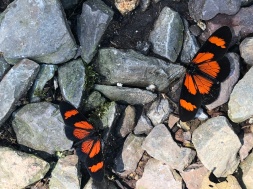 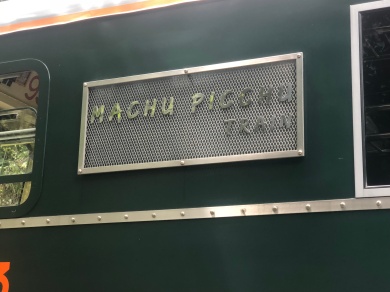 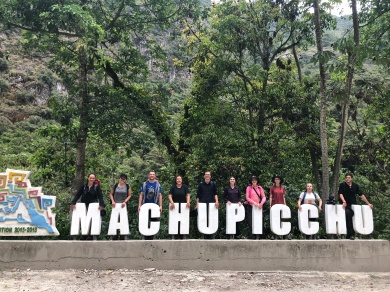 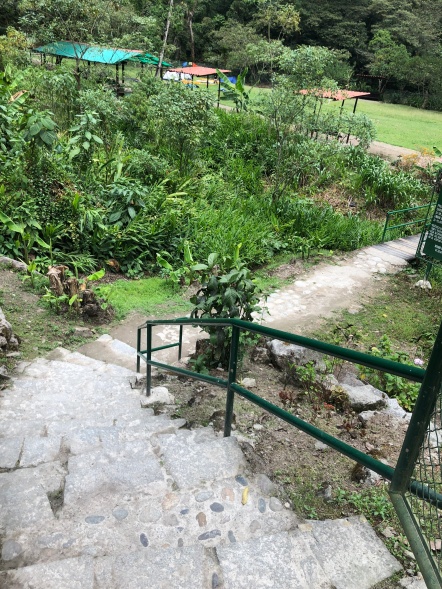 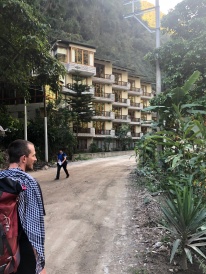 Day 5, the day we had all been waiting for!

We set off up the 1876 steps to the summit, or the gates of Machu Picchu.

Joined by thousands of others from around the world we entered these gates and immediately, were breathless. The sheer size of the ruins, atop the mountain and in the clouds was unbelievable! Seeing it from below or the side will never truly reveal how amazing the ruins and the expanse they cover until you are looking at them from above!

The Incans were truly astounding people and what they were able to build and construct without the tools we have now is hard to believe. The stability and precision something we do not see today! They used the boulders atop the mountain to build their places of worship, their houses and even a sundial. The wealthy and the workers separated by the vertical gardens all terraced and now covered in plush green grass.

Splitting from the group and taking the time to move in and out of these amazing buildings, look down the sheer cliffs from their windows and interact with the Lamas was something special. The ruins are tightly supervised by a number of locals who all have whistles. You are not allowed to be loud, jump up and down, eat or sit on the ruins. If you do they will blare their whistles and wave at you wildly. The reason you are not allowed to jump up and down is they have had multiple deaths from people doing this and falling off the side and to their deaths. Who would have thought!

For a lot of people, myself included, life can seem to move to fast, be to hard and feel so unsatisfying. Well this was a moment where it felt all to overwhelming for me! As someone close to me said, “Shelley your cup is never half full, it is always overflowing!’ This was an overflowing moment and boy did I feel it in my bones. How lucky was I to be where I was and to have done what I had done. Even better I had done it with other peoples children and given them an experience I had waited 33 years for before they had even left high school! 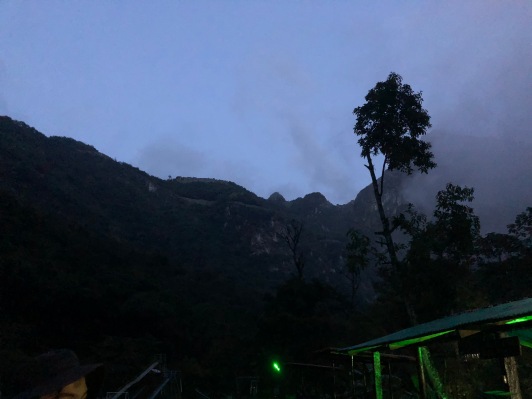 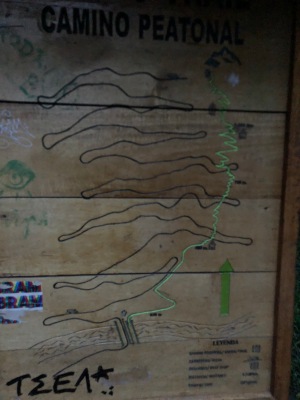 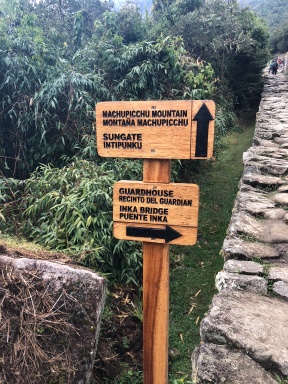 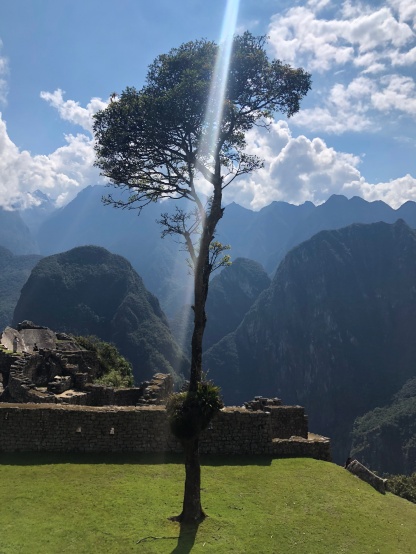 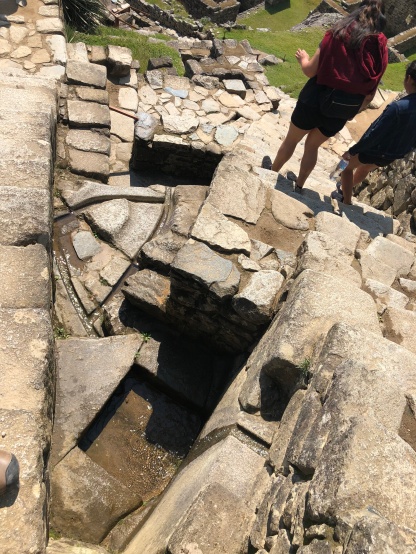 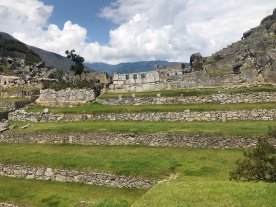 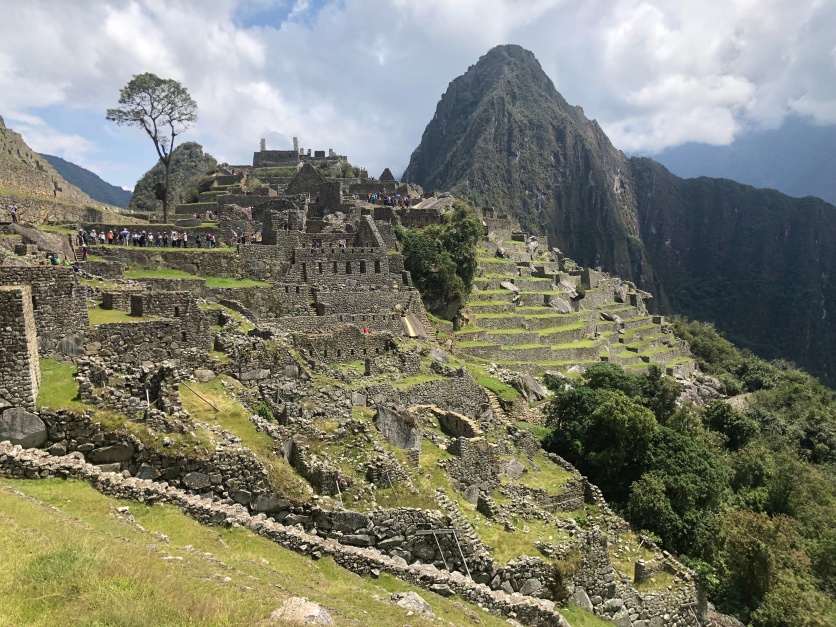 An x wife to a FIFO (fly in fly out), a mother (well mostly single mother), a step parent, a daughter, a full time teacher, part time respite worker. A funny personality person and outdoor lover! A patient and positive person who has learnt a lot through life and cannot wait to share it! View all posts by insightintowhatitsrealkylike

One thought on “That liberating feeling! (Part 2)”